My mom is living with us while she fights cancer. She loves pineapple and shrimp, so I made this for her. It was so good. The dish is beautiful and would be great to serve to guests.

As always, here are my suggestions for tweaking the recipe. You can buy the shrimp already cleaned. It saves you about ½ hour. You can also use fresh pineapple. If you do that substitute orange juice for the pineapple juice. That way you won’t have a jar of pineapple juice you won’t use going bad in the fridge.  I try never to ask you to purchase anything that you will only use in the specific dish we are making. Buy hoisin sauce. Once you taste it, you will find uses for it. Your favorite hot sauce will do if you don’t have sriracha.

Always read the entire recipe before you begin.

Cordon Bleu means blue ribbon in French and refers to food cooked to the highest standard. The original Cordon Bleu is either chicken or veal, which is flattened, wrapped around cheese and ham, breaded and then fried. It is usually served with a white sauce.  I have given you instructions for an easier (but just as tasty) version.

If you don’t have a skillet that can be used in the oven, just put everything into a glass baking dish and then top with the remaining cheese and breadcrumbs. I made my own breadcrumbs by grinding croutons and a little fresh parsley. If you begin to boil the pasta water right as you cut up the chicken, the pasta should finish at the same time that you are ready to use it. If you cook it first, toss it with butter and salt to keep it from becoming goopy. Penne, ziti or any other tube pasta can be substituted for the penne rigate.

Servings: 4-6
Time:  Active time: 10 minutes; Cook: 40 minutes; Dinner in under an hour
Hardware:  a large pot, a colander, measuring cups and spoons, a cutting board and knife, a very deep skillet that can be used on top of  the stove and in the oven, a plate, tongs, a whisk 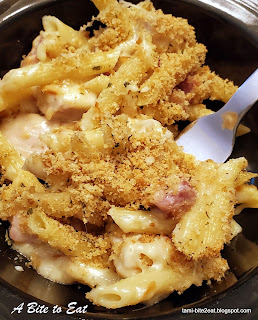